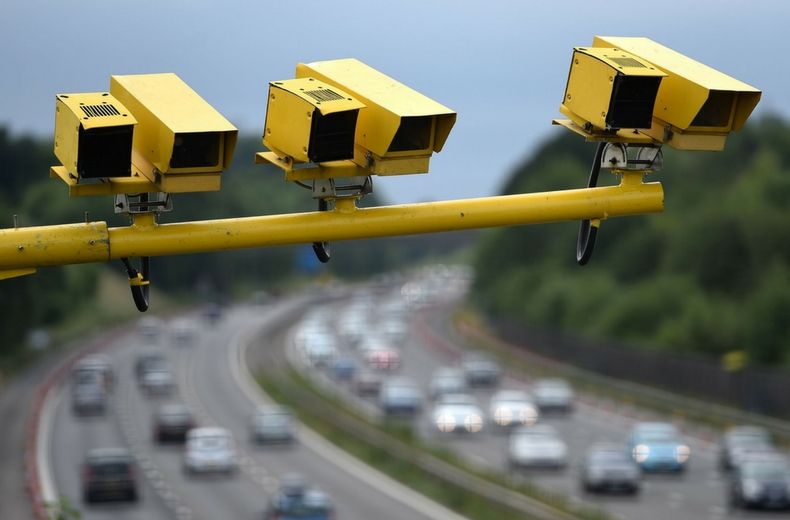 Hertfordshire Police have sent in the New Year a letter to chase a vulnerable Driver who has mental health disorder is being distressed over a petty and potentially incorrect system.

He originally received a ‘Notice of intended prosecution’ for allegedly speeding on the M25 at Junction 16 due to alleged congestion during the hottest week in July 2022. When people were being advised to only travel if essential. The RAC said “people should question their decision to drive in the first place.”

Carbuyer say variable speed cameras are usually mounted on roadside gantries at regular intervals of more than 200 metres, although the latest SPECS 3 cameras need only be 75 metres apart. Yet in the photos it is just the length of one car. All the three cars visible appear to move same distance. Maybe this shows all vehicles are doing the same speed.

Speedcamera uk also say that these RedFlex point to point speed cameras measure the drivers average speed from one speed camera location to another. (many dodgy police tactics can be read on Comments from UK Motorists

The claim that it was due to congestion during the hottest day of 2022!! I believe there was less traffic was on the roads as users feared breaking down and being boiled to death in the Unprecedented extreme heatwave as put by The Met office “The 18 and 19 July were the UK’s hottest days on record, the first time 40°C has been recorded in the UK climate history. And when “Reports of multiple fires across the country”. London Ambulance Service says it is answering 400 calls an hour as a result of the extreme heat.

Just the day before the issue, MyLondonNews wrote an article “Heatwave sends London speed camera ‘berserk’ as it flashes uncontrollably at drivers doing 10mph” in Dagenham in East London snapping dozens of drivers despite them driving under the speed limit during the record 40C heat which took the capital to boiling point this week.

Their article continued “Redditors found the chaotic video hilarious, commenting “It’s actually trying to communicate using Morse code. It says ‘Help me. I’m too f***ing hot. Please disconnect me and let me die'” and “The camera is simply covering all bases…. If it records them all then at least its got the right one”.

Another driver recalled a similar incident. He said: “I remember this happening on the M25 once, you could see it occurring from quite a distance away as you approached, so everyone started going slower than the car in front causing a fair amount of congestion.”

Upon the recent letter sent this month 6 January, the driver something wasn’t right and had acted in a responsible way. “I decided to do some checking to confirm my theory and my belief of the mistake”

Earlier that morning at Junction 14 that ‘Just Stop Oil’ protestors were up in the gantries with their banners.

I am a careful and considerate road user for nearly 40 years, and because I saw an empty motorway ahead I continued whilst being on the alert ready if and when any such congestion appeared in the distance.

With a full clean license and full no claims for over 20 years, yet the appeal fell on deaf ears at the constabulary. Just when the police are in the news again for their bullying, sexual offences, and racism. Are we to add harassment to drivers and vulnerable people to the list.

I recently watched documentaries on Artificial Intelligence (A.I.) and it concluded humans are intuitive and this gives us an edge over things like speeding cameras that end up targeting our intelligence”

Active Traffic Management systems on motorways, are designed to reduce congestion and increase safety in busy sections of motorways. Temporary speed limit signs on gantries above the road and these now also have speed cameras to identify drivers exceeding these speeds. Yet I have been driving for over 30 years with not ever having an accident on the motorway. I put my hazards on if traffic becomes to a standstill. I drive with safety as I do not want myself, my car or others to be at risk. I feel the police have failed to take into account all the things I am pointing out, and that this is my first ever legal issue on a motorway, and is unlikely to happen again. Now that I have realised these speed systems are not just guides or alerts, but are instead ways to penalise common sense.

The driver who is also on benefits due to his disorder can’t understand why police can’t let this slide as no one was injured, no harm was caused, and a safe journey was completed against the record weather conditions. He feels an anomaly had occurred and caused the congestion cameras in the UK to misread the situation, either over haze caused from expanding tarmac, other factors related to heat and even the devices operating differently.

I have responded and added the url to this article.